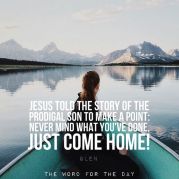 Jesus told this parable which is the story of a father’s love for his wayward son. The story is to illustrate a spiritual point which Jesus is using to teach us of God the Father’s love for each of us. While we are all sinners, as was the prodigal son, that God the Father is willing to accept us back, given the mistakes we have made.

This parable has a common theme with two other parables. Whether is was a lost sheep, a lost coin or a lost son, there is rejoicing when that which is lost is recovered. Also, in each parable there is also repentance. When the returning son said to his father: “Father, I have sinned against heaven and in your sight, and am no longer worthy to be called your son.” The rejoicing that God the Father, and His spirit family, which includes the angels, desire to do is predicated upon repentance.

Because repentance is such an important subject for all who wish to be part of God’s eternal family, it is not surprising that Jesus included this teaching in the parable of the prodigal son and two other parables that precede it in Luke 15.

NO MATTER HOW FAR WE WANDER,

HE WILL ALWAYS RUN TO WELCOME US BACK.