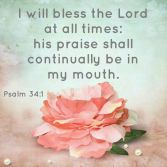 Glorifying His Name in the Valleys. If you like rodeo, chances are you have watched the NFR (National Finals Rodeo) every year in December that is held in Las Vegas. It’s where cowgirls and cowboys, the best in the country, come together to compete for the championship title. I respect many of these athletes because they give glory to God for the opportunities in which they have been given to glorify the Lord. This past year, Trevor Brazile, an American rodeo champion who holds the record for the most NFR world champion titles, was vying for what would be his last NFR. He had come in to say I am not going to seek as hard the title of champion in order to spend more time with his family. Thinking this could be possibly his last NFR, he, along with everyone else knew that it would be great to leave as a champion once again. Well, the rounds were proving not to go as well as he had predicted but towards the end he was able to pull out the win. Now, what caught my attention the most was what he said when interviewed….you see Trevor has always professed his love for Jesus Christ and he openly shares his faith. But with tears in his eyes he said he wondered if he didn’t win, would he still be able to give God the glory and would his faith still stand as firm. At that moment, the human side of a champion is revealed and we can all relate.  We all face similar challenges every day. It is easy to glorify God and to have faith when things are going well in our life but what about when they don’t. We all know we will have those days when our plans and dreams won’t go the way we plan. In those times, will we still be able to praise Him?

Realizing the difficulty of thanking God in the hard times is what makes Habakkuk’s words so amazing. In Habakkuk 3:17-19 he says “Though the fig tree does not bud and there are no grapes on the vines, though the olive crop fails and the fields produce no food, though the fields produce no food, though there are no sheep in the pen and no cattle in the stalls, yet I will rejoice in the Lord, I will be joyful in God my Savior. The Sovereign Lord is my strength; he makes my feet like the feet of a deer, he enables me to go on the heights.”

God and His promises will not change nor fail us, we can promise ahead of time to be thankful even during the worse of times. One promise we can count on is that God will provide a way for us to experience salvation.

God is sovereign and He is in control of everything. “And we know that in all things God works of the good of those who love him, who have been called according to his purpose.” Romans 8:28

True joy and peace don’t originate with us, but come to us as the gifts and fruit of God’s grace. May we always pour out our hurting hearts to Him in prayer, and then reaffirm: Psalm 34:1 “I will extol the Lord at all times; his praise will always be on my lips. My soul will boast in the Lord; let the afflicted hear and rejoice.”

When we face difficulty or things are not going the way we had hoped or planned, run to Him, praising and thanking Him for all you have in Him!